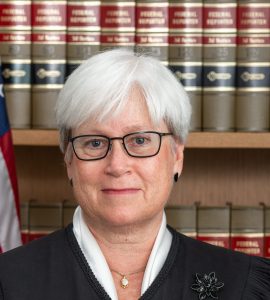 Judge Tighe was appointed a United States Bankruptcy Judge on November 24, 2003 by the United States Court of Appeals for the Ninth Circuit and was appointed to a second 14-year term in November 2017. She was the district’s Chief Bankruptcy Judge on from 2019 through 2021. Judge Tighe hails from New Jersey where she obtained her B.A. from Douglass College of Rutgers University, and her law degree from Rutgers Law School-Newark.

Her career includes serving as the United States Trustee for the Central District of California for five years, and for various periods also for the Districts of Southern, Eastern and Northern California and Nevada, Hawaii, Guam, and the Northern Mariana Islands. She was an Assistant U.S. Attorney in Los Angeles where she was the Deputy Chief, Major Frauds Section and started the district’s Bankruptcy Fraud Task Force. She spent a few years in private practice at Sullivan and Cromwell in New York following a clerkship with U. S. District Judge Harold Ackerman, District of New Jersey.