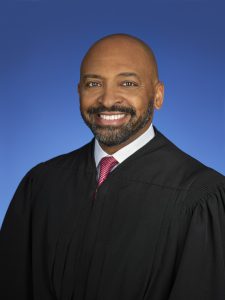 Judge Darrin Gayles is a United States District Judge for the Southern District of Florida. Following his 2014 nomination to the District Court by President Obama, the United States Senate unanimously confirmed Judge Gayles’ nomination by a 98-0 vote – making Judge Gayles this nation’s first openly gay, African American man to serve on the federal bench. Judge Gayles previously served for more than ten years as a judge of Florida’s 11th Judicial Circuit. A graduate of Howard University and the George Washington University Law School, Judge Gayles has been a leader and active participant in South Florida’s legal and civic communities. He has been the recipient of numerous awards, including the National Bar Association’s 2019 Judicial Service Award, the Dade County Bar Association’s President’s Award, and the Lawyers in Leadership Award from the University of Miami’s Center for Ethics & Public Service. Judge Gayles is an adjunct professor at the St. Thomas University College of Law and serves on the teaching faculty for Harvard Law School’s Trial Advocacy Workshop.